The initial step before calculations of simulation lattices was to separate the 4 masses into separate lattices for generating values locally for the individual masses. The voxelated lattice of the massing as derived from Massing Problem is a numpy n-dimensional array consisting of ones and zeroes. Ones represents the voxels inside the 3d object which are available for occupation and zero represents the exterior voxels which are not relevant to the simulations.The pseudo-code for voxelation is as follows.

The binder link to the code 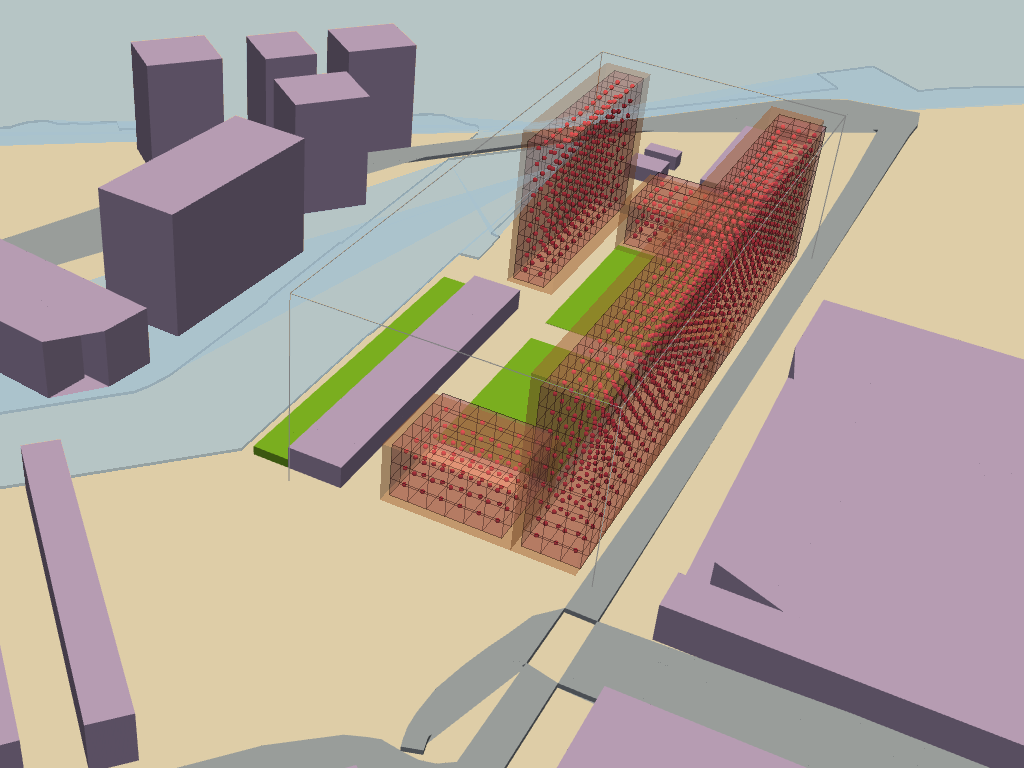 The Quiteness Lattice is a measure of the sound pressure recieved at each of the locations in the mass or the voxelated grid.The calculations related to the sound insulation are complicated and require a lot of data with respect to the material qualities of the building the sound pressure at the source of sound etc.The general equation for airborne sound insulation of a facade is given as:

The distance from the source of the sound to the room is critical in this calculation and there can be a 6Db reduction in the sound pressure level with doubling of the distance from the source.This relation can be easily calculated, and will provide a good estimate for decision making regarding the quietness of the voxel with respect to the source of sound.The code for calculating the same would be as follows: 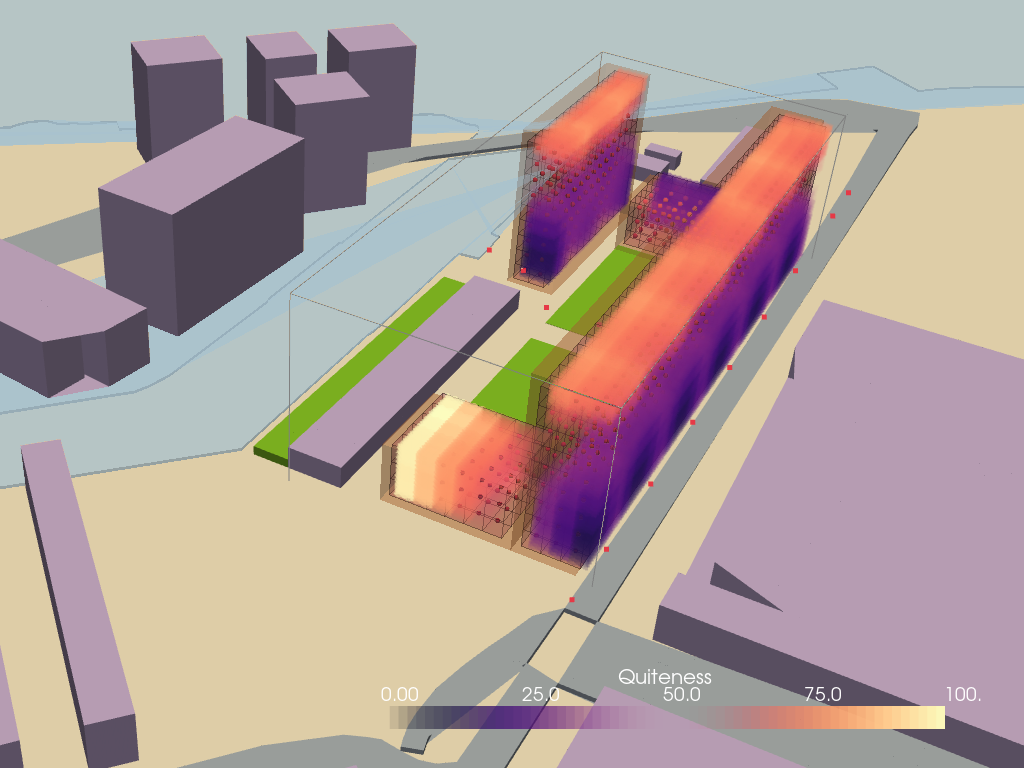 Closeness to the Facades lattices⌗

The facade closeness lattice determines the distance of the voxels in an lattice with respect to the outermost voxels in a specified direction. The calculations for the euclidean distances or the closeness was done for all the facades in the four cardinal directions and to the terrace and the ground for all the masses. 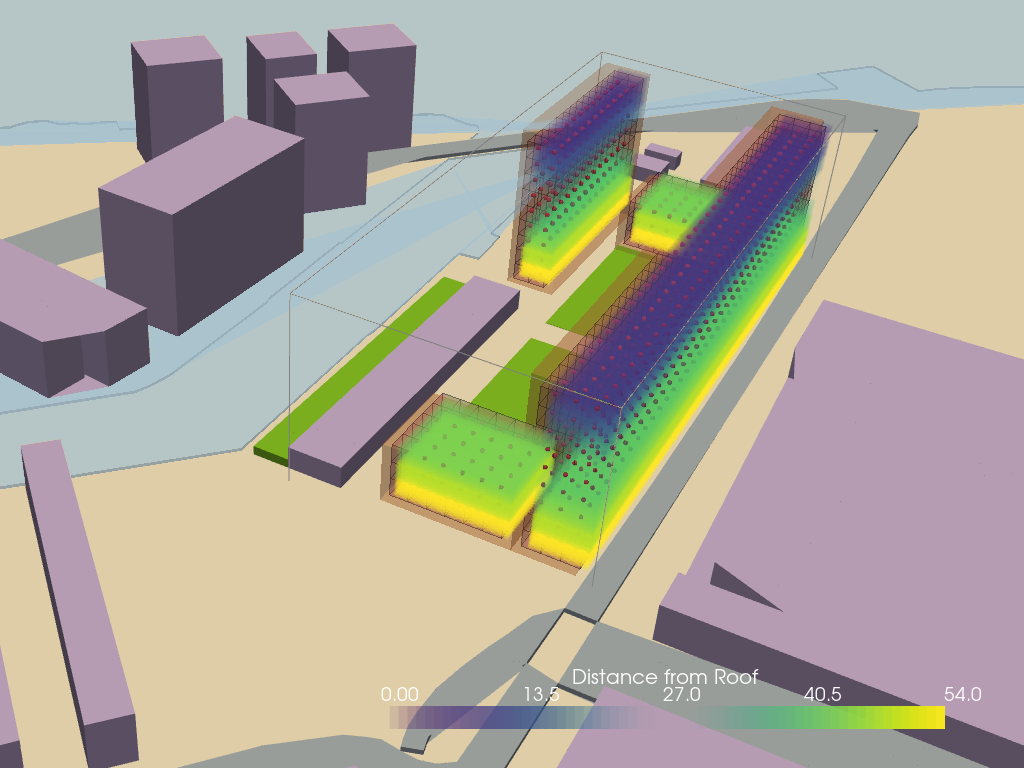 Distance from the Roof Lattice 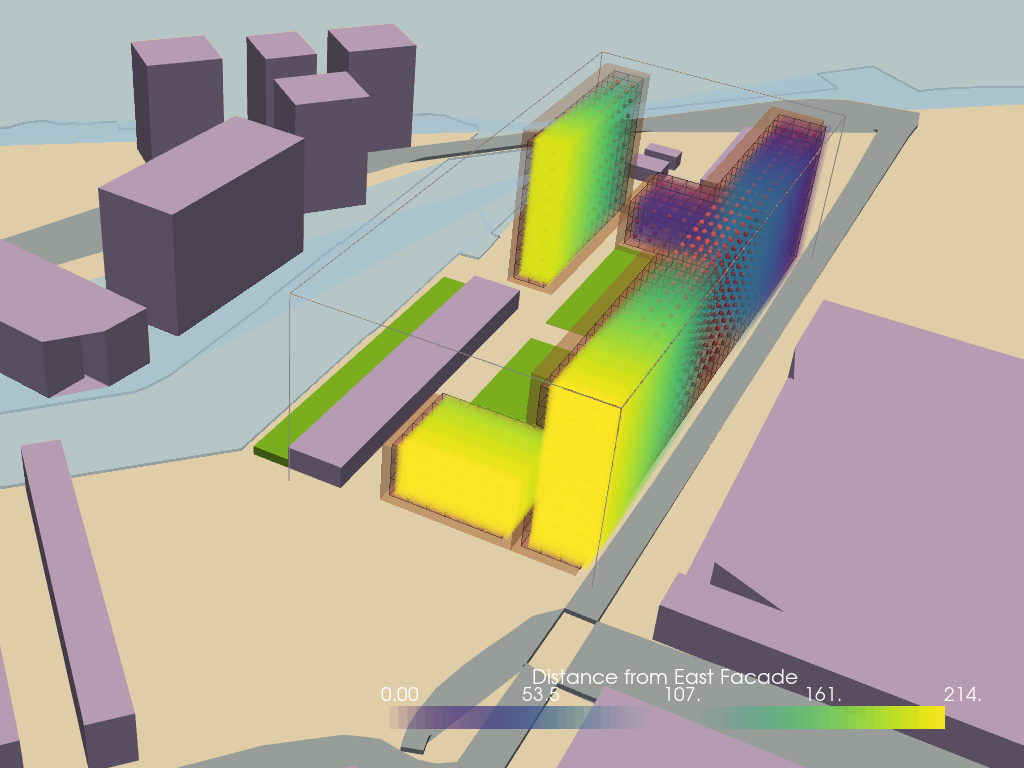 Distance from the East facade Lattice 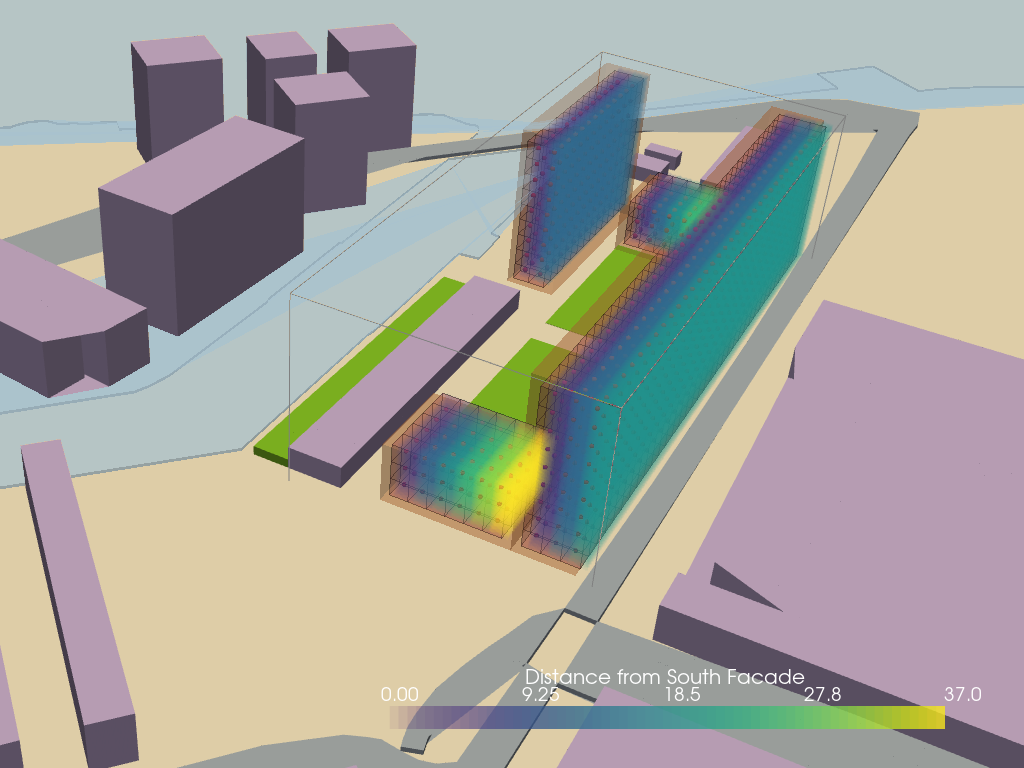 Distance from the South Facade Lattice

The binder link to the code for generating distance based lattices

Access to daylight is critical for a good quality of indoor environment and has shown links to productivity and wellbeing. Daylight analysis is generally done in a later stage of design process where the internal layout of spaces and the geometry and sizes of the openings in the spaces are already designed. The material properties of the elements used in facades and inside the spaces themselves also play a big role in determining the amount of daylight received inside a space. At an early design stage the access to sun received by the mass is also a good enough metric to calculate the daylight factor for the building. This can be calculated by calculating the Vertical sky component (VSC) Vertical sky component is the amount of sky which is visible from a point of reference considering the obstructions in the surroundings. That area of visible sky is expressed as a percentage of an unobstructed hemisphere of sky, and, therefore, represents the amount of daylight available for that particular window. It does not consider the size of the room or the number of windows it only calculates the access to the sky.

The pseudocode for the calculation would be as follows: 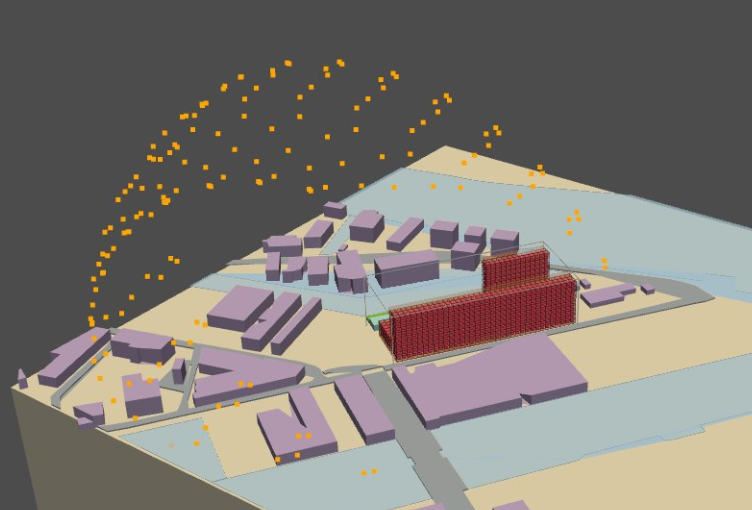 The library Ladybug tools was used to generate the sun positions based on the location for the particular site.These locations were used to create sun vectors from which rays were shot towards the centroids of the voxels. The intersection with the context was checked using the library trimesh and the percentage of non-intersected rays was calculated which is the vertical sky component. 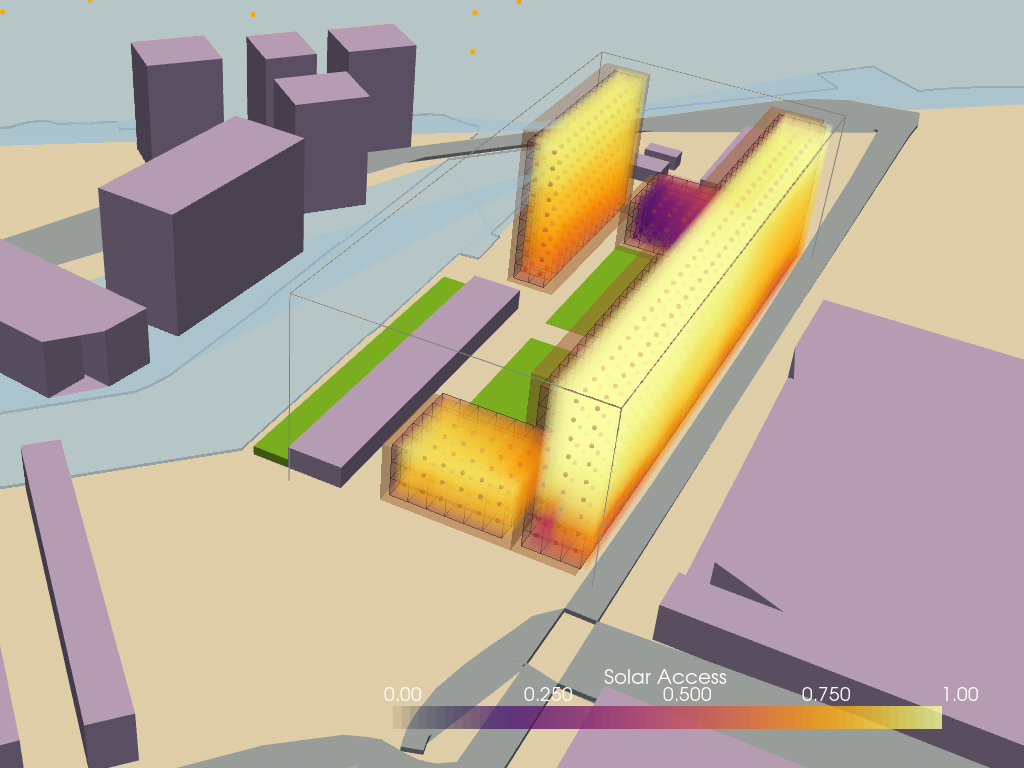 The binder link to the code for generating solar access lattice

The characteristics of building locations, building height arrangements, and other circumstances need to be considered in a study of visibility analysis. Visibility studies in a two-dimensional representation have been utilized for a long time for landscape, architectural, and urban studies to calculate the view of a structure or element in the spatial environment. However, a 3D study becomes more comprehensive and accurate to determine the visibility. 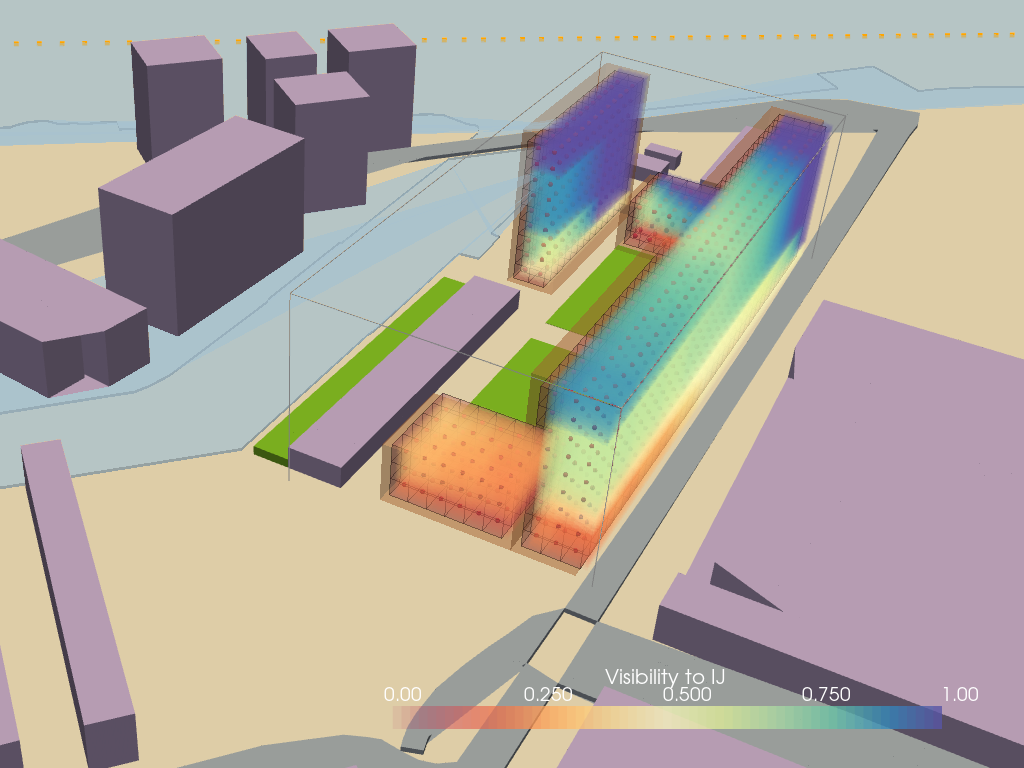 Visibility to the IJ Lattice 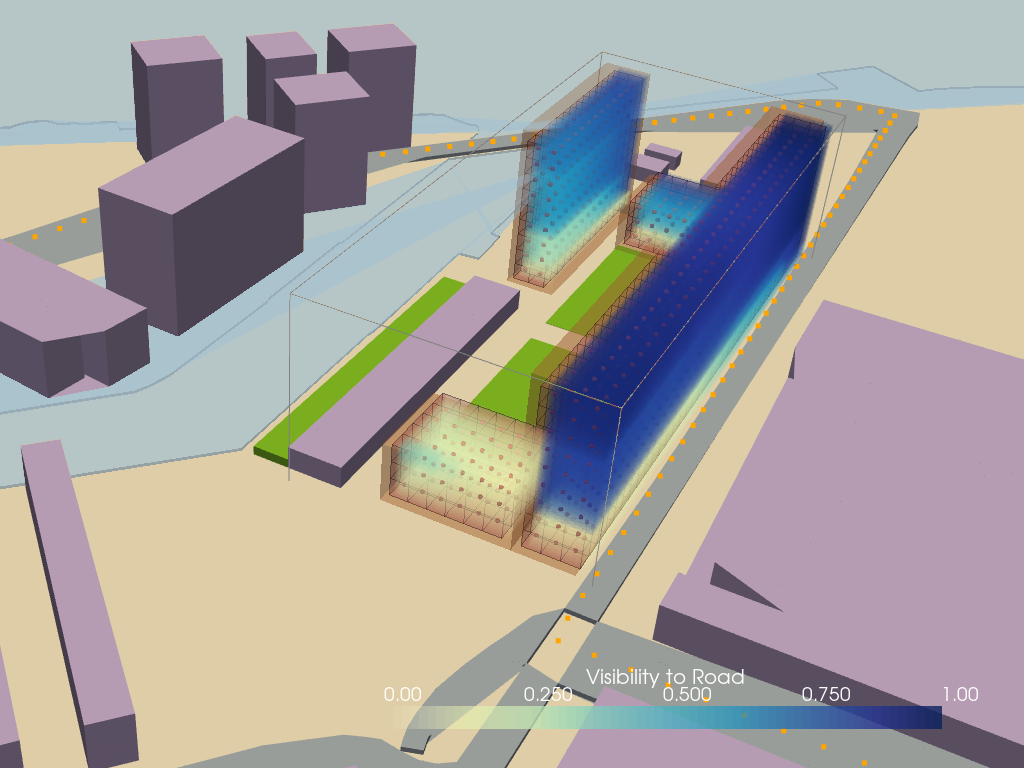 Visibiity to the Road lattice