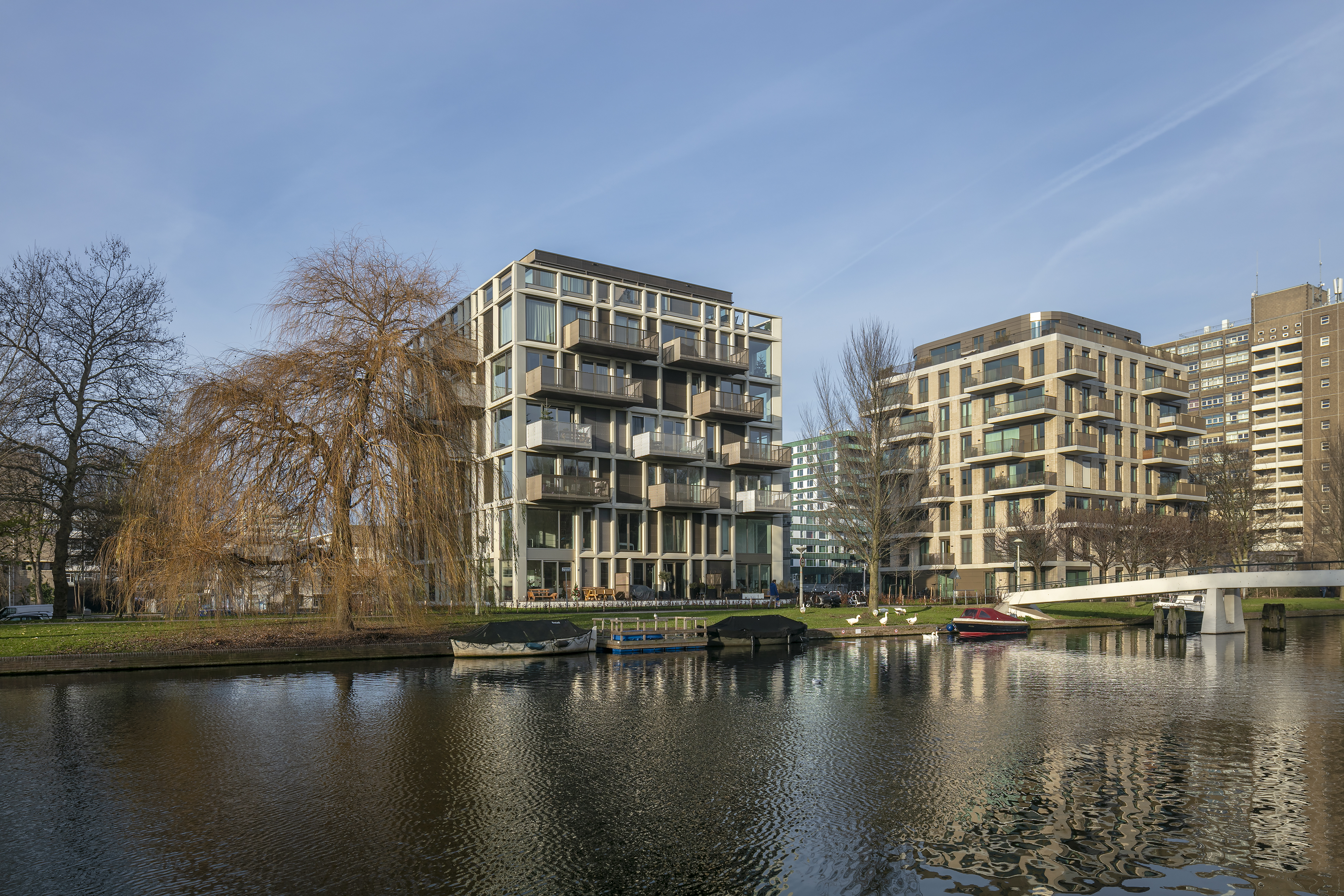 The projects based on the Open building concept are considered as part of case studies since the approach inherently is a participatory one and is in alignment with the intention of the project. Open buildings make a distinction between support and infill. The support represent the most permanent parts of the building like the structure and can be seen as a bookcase. The infill represents the adaptable part of the building or in other words the books.

The Molenvilet project in the city of Papendrecht in the Netherlands designed by Frans van der Werf is a classical example of the open building concept.The buildings are designed as a standard set of parallel columns and standard floors and roofs consisting of three floors and an attic. The buildings have been formed along four courtyards and are kept as empty shells with only the structure. The land parcellation and the number of units were done in consultation with the housing corporation.

Once the constructions of the structure of the building started the meetings between the future residents and the infill contractor were scheduled. An empty copy of the building was kept for the discussions with the users and accompanying facade frames were added. In the first meeting the functional requirements and the required spaces for each family member with respect to their age, hobbies and preferences were discussed.

First discussion session of the architect with the users Image source

After two weeks based on the first meeting drawings and details were made which where finalized with the users.In the second meeting the layout of the facade was also discussed and finalized based on the light and ventilation requirements of the users and they were also given a choice to choose the colours of the facade elements from a set of 8 different colours chosen by the architect.The resulting project became a classical example of mass customization based on user preferences. 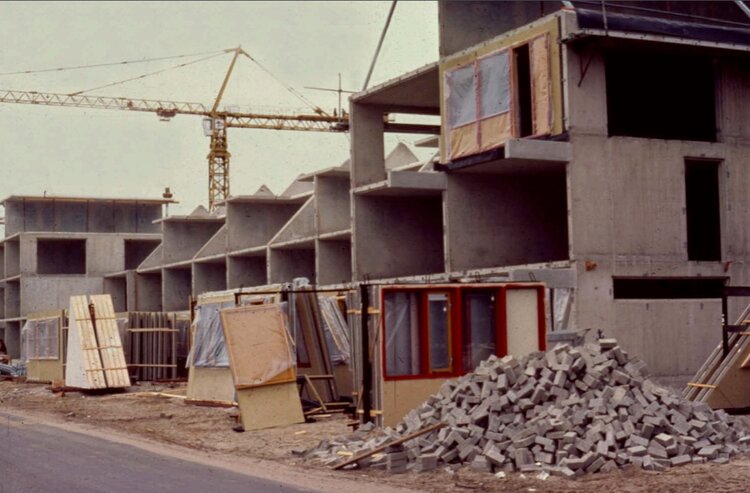 The Shell construction of the project.

Superlofts is a flexible design and development framework and is developed by Marc Koehler Architects. Superlofts offers its members the freedom to customise or design and self-build their homes from scratch incorporating any hybrid function, and co-create shared spaces to build a global co-living community []. 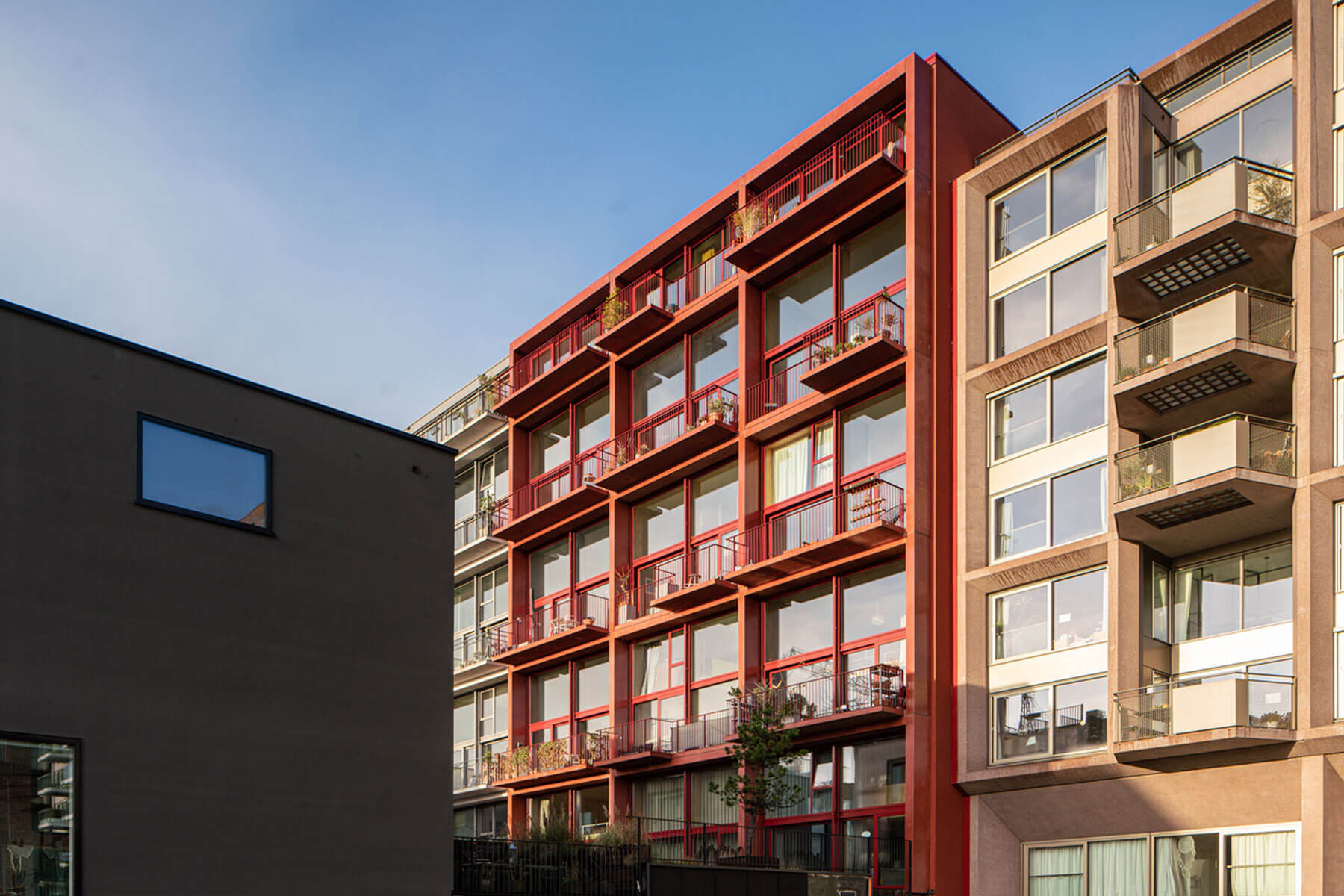 The idea of super lofts is to adapt a open and circular framework where the lifecycles of the structure and the infill layers are independant of each other like the facades can be changed/modified after every 25 years, the HVAC installations after 10 years and the interiors after every 5.This can lead to less material wastage and efficient use of resources.

The base building comprises a prefabricated modular concrete framework composed of five to six meter high modules which forms the structure part of the building.The infill elements can be developed as per the needs of the owners requirements. Pre-fabricated walls and floor form one unit which are then stacked on top of one another.The project also offers it s users to grow their spaces gradually so they don’t have to invest all their money at the same time and also there is a possibility of making the infill of the lofts independently of the main contractor. 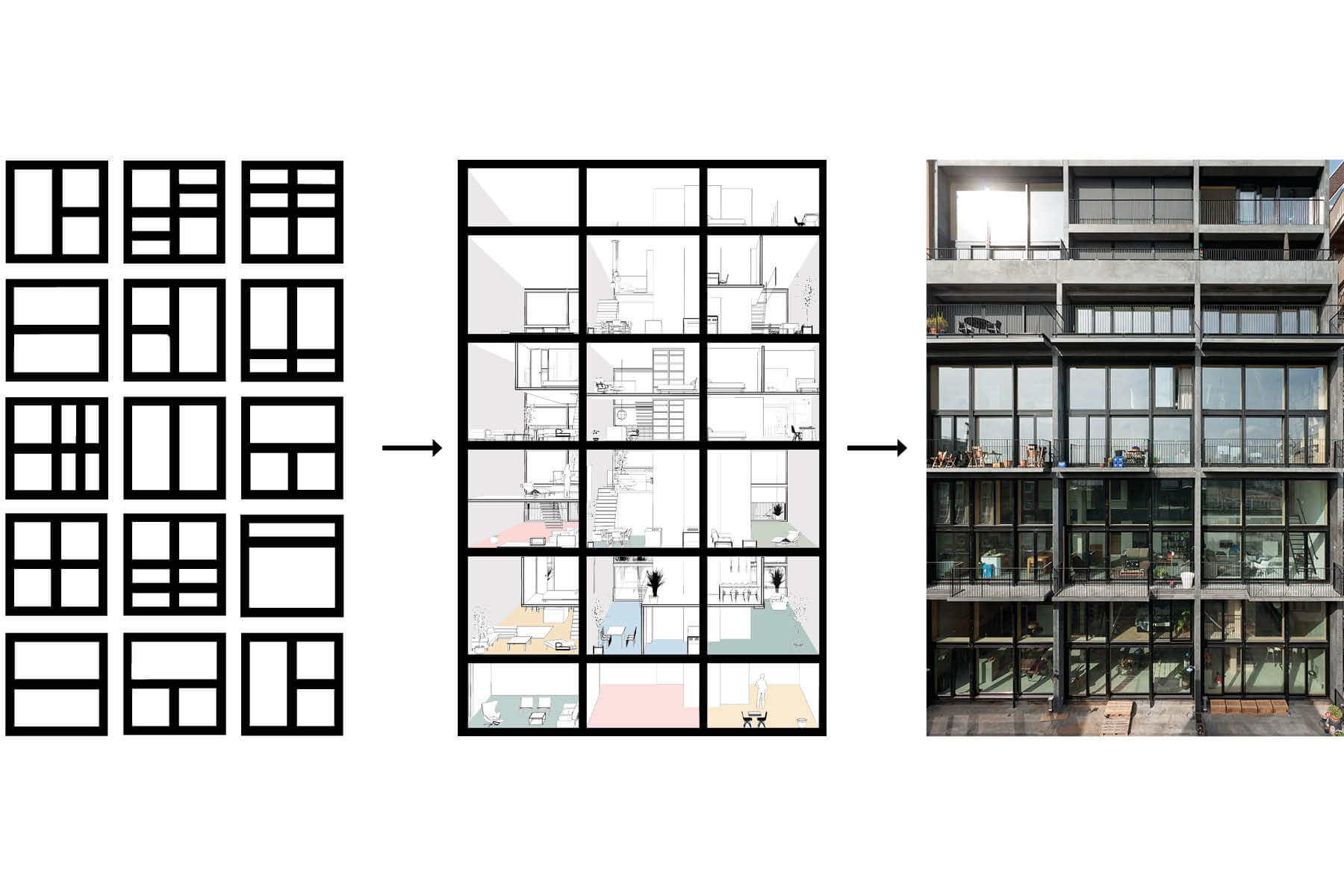 The facade system is a prefabricated aluminum modular building system that is easy to adapt to the specific demands of each user/owner. It has the intention of energy saving, natural ventilation and sun shading systems and rainwater drainage. There are several configurator tools which are under development for these projects as well like the site planning tool the house customization tool for the infill etc.which show close resemblance to the thesis project and also offers a validation to justify the need of such a tool. 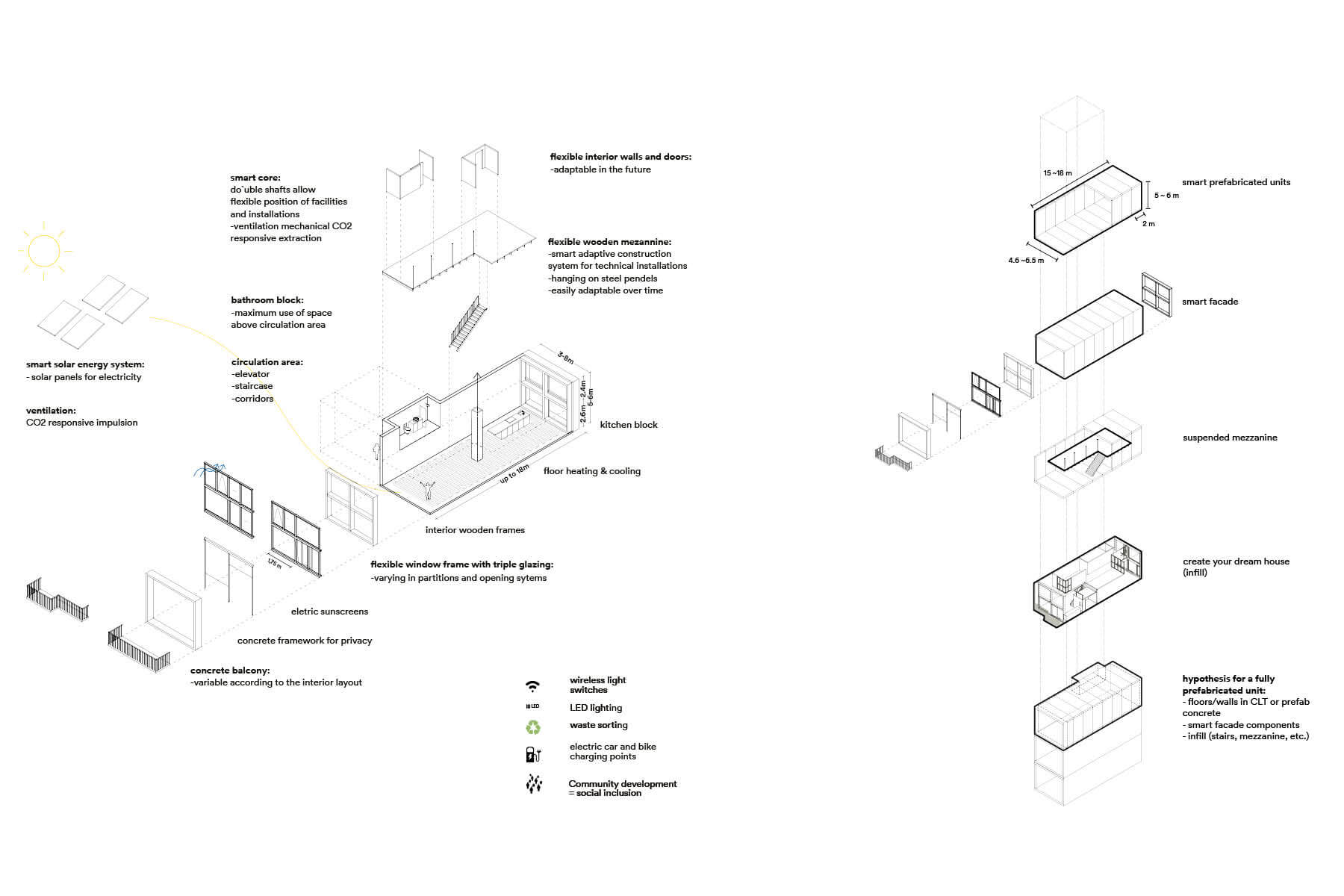 The Sketchblock project is also an example of the open residential building project designed by ANA architects for the 4Winden foundation members on Westlandgracht. In Sketchblock the position size and the layout of the dwellings can be customised for each residents needs. There is also a possibility of combining houses which are next to each other or above one another. The equipment of the home, outdoor areas and communal facilities have also been further developed by the residents. 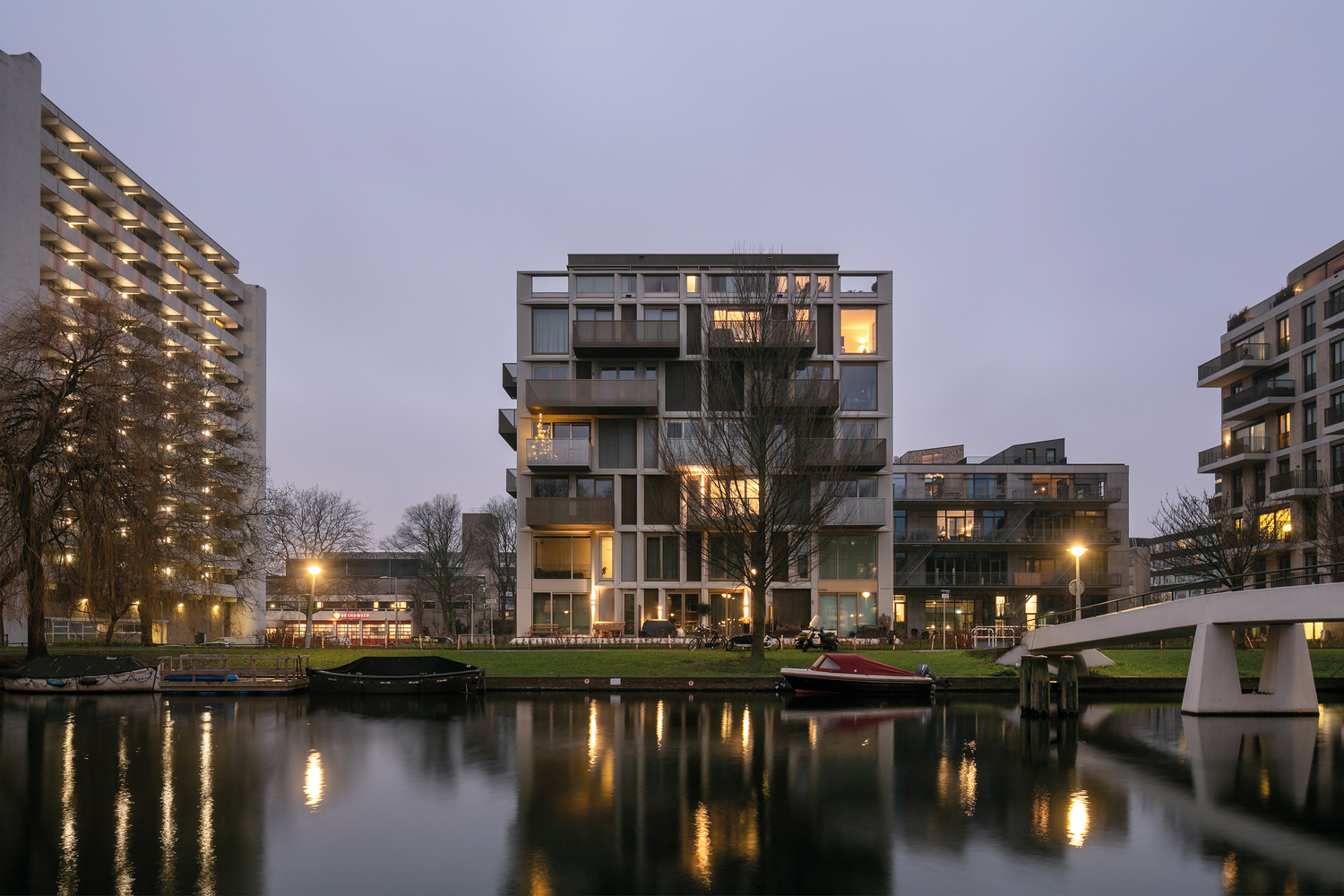 The Sketchblock Open building project at Amsterdam by ANA architecten.

The process involved in this project was similar to the molenvilet project [\ref{Case study molenvilet project}]. The meetings between the residents and the architects were arranged to design the layout of the apartments and finalize the detailing of the projects. Each house layout was custom designed by the architects.This in evidently lead to the creation of a catalogue of plans for each house. The architect had also clearly defined the rules for customization beforehand with the residents so that the design character and integrity of the building is maintained. 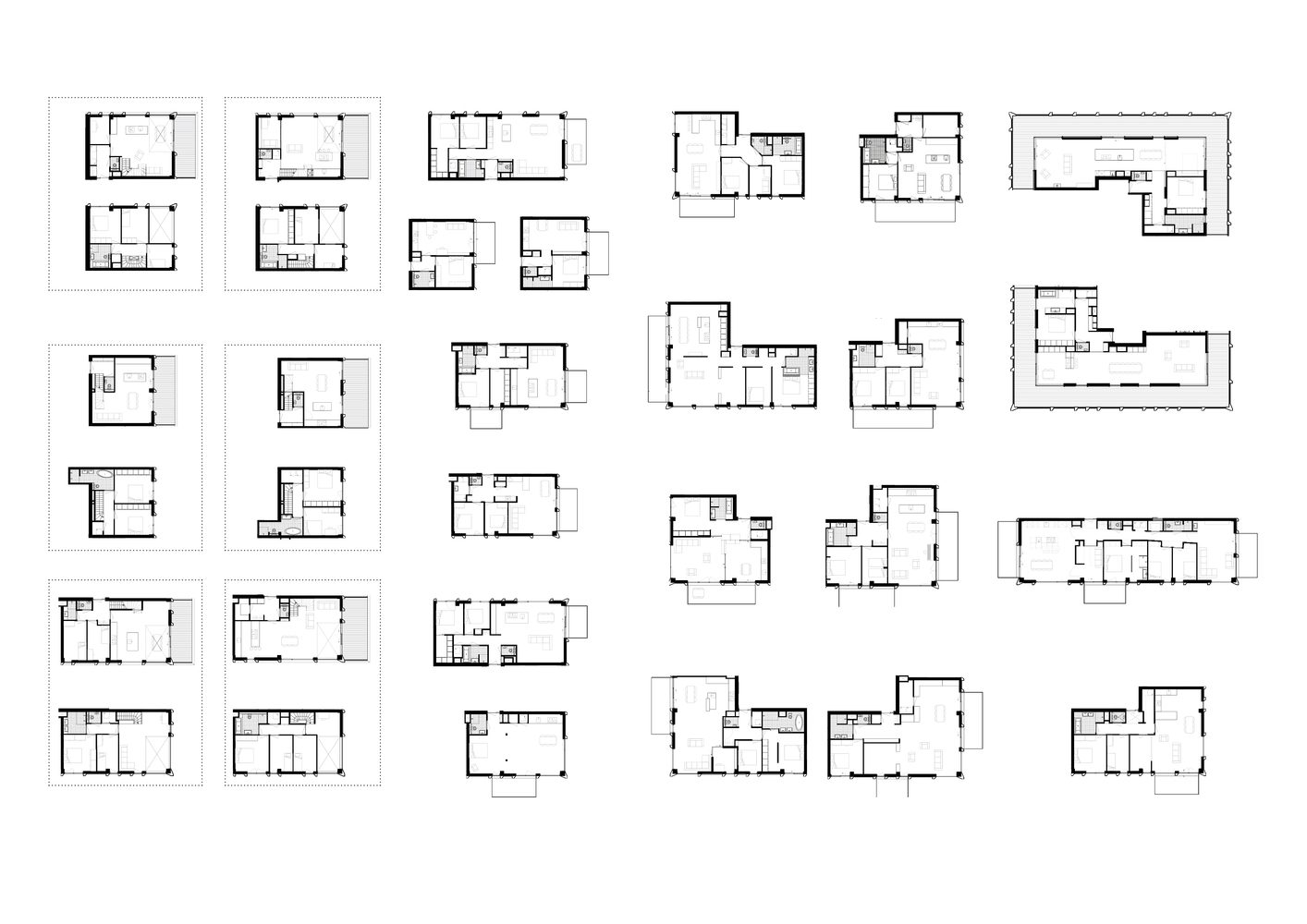