In order to test all the modules developed in the thesis a test case becomes essential. The test case for the project should be mixed used multi functional building on a site that has strong characteristics that will be influential for the design. The limits of the tool will truly be tested when there are a lot of spaces that need to be configured and they have contradictory requirements.

The site selection process started with looking at Urban centres in the Netherlands. Dense Cities provide a good context and a challenge for the testing process and choosing a Dutch city is ideal because of the good quality and the extent of the data which is available for them.

After doing an extensive search a site in the northern part of Amsterdam was selected. Buiksloterham is a neighbourhood in Amsterdam north which has an industrial past and is located very close to the old centre of Amsterdam just across the IJ river. Buiksloterham has a lot of empty plots and no monumental industries which provides a blank slate for experimentation of a new methodology of designing buildings as proposed in this thesis.

The plan for the neighbourhood according to Geemente Amsterdam

The municipality of Amsterdam has a clear plan focused on sustainability and circularity for the development of this post-industrial neighbourhood. In the action plan for a circular Buiksloterham the neighbourhood is envisioned as the test bed for the future of Amsterdam. The polluted lands of the neighbourhood aim to be the source of clean technologies and hub for closure of urban material cycles. The activities needed to close these local material flows can be used as a driver for local industry and the strengthening of local social networks. IT-based interventions can smartly connect local residents with one another and boost the efficiency of resource flows. Urban biodiversity and climate adaptation measures are conceived as a core strategy to bring long-term local resilience to the area. The development projects aim to be the beacon of change for the development of post-industrial areas around the world.

After inspecting the neighbourhood development plan for a mixed used proposal the site at Buiksloterham and Co. was selected due to its interesting location in the neighbourhood and due to its regular shape. A mixed use living and working buildings are planned in this part of the neighbourhood. The location faces the river banks of the IJ. According to the current plan by the municipal corporation Buiksloterham & Co will have a total of around 520 homes. The development type is varied from self-build plots and market plots (CPO) to owner-occupied apartments and rental homes. There is an attempt to integrate Living and working. Office and work spaces will be integrated with the residential spaces in the buildings. There is also a possibility of self development of houses by the owners themselves. 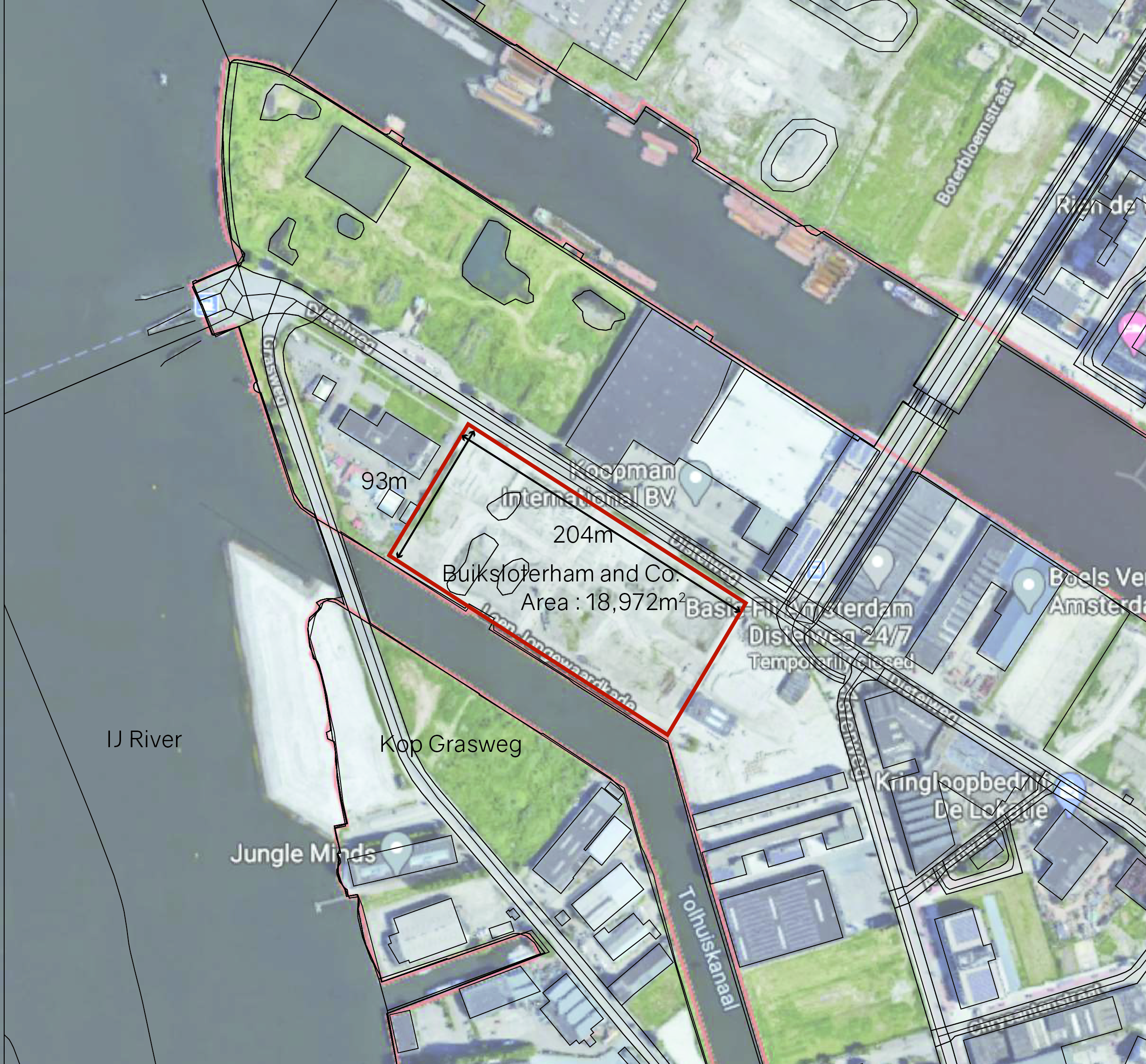 The following factors can be considered while generating the design parameters for the project on the site. There is a road which divides the plot into two parts and is the main access road for the plot. The vehicular noise would be considerable from this part A pedestrian bridge is envisioned on the canal located on the north side connecting the Kop Grasweg a mixed used neighbourhood and the site. The location of commercial space could be driven by this connectivity.

The development of Kop Grasweg should also be considered since it can block the sunlight from the South side of the plot. A large boundary of the site has visibility to the bank of IJ and could act as an attractor point for the apartments and offices. The vision for the neighbourhood is a participatory one so there is a strong chance of a healthy participation from all the stakeholder.The following factors can be considered while generating the design parameters for the project on the site.There is a road which divides the plot into two parts and is the main access road for the plot. The vehicular noise would be considerable from this part.

A pedestrian bridge is envisioned on the canal located on the north side connecting the Kop Grasweg a mixed used neighbourhood and the site. The location of commercial space could be driven by this connectivity.